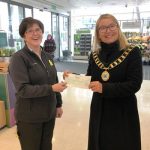 Bracknell Town Mayor Cllr Sandra Ingham is delighted to accept a £270 cheque from Waitrose towards the Mayor’s personal charity: the South Hill Park Youth Programme including Wilde About Arts, Wilde Week and 11/17.

“On behalf of the young people benefitting from South Hill Park’s youth programme, I would like to thank Waitrose and Waitrose customers for their support,” said Bracknell Town Mayor Cllr Sandra Ingham.

The donation came through the Waitrose Community Matters green coin scheme. By placing a token in the Community Matters box at the local Bracknell branch you’re helping our local community and since its launch in 2008, the nationwide scheme has donated over £30 million to good causes.